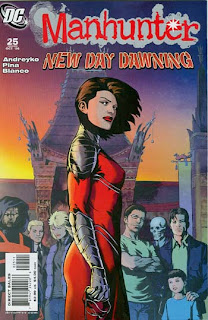 A while back, I noticed I was missing a few issues of Manhunter. And since I'd fallen behind in reading it, I ended up buying the trades and reading the whole series from the start. I finished last night. And it's been one thrill after another. So, let me tell you about the best comic you're probably not reading.

First, I've been reminded of how good this book is. Kate Spencer is a great character. She's flawed, she's real, and she's having the time of her life. She spent many issues trying to stop smoking. She's never gonna win World's Best Mother but she does love her son, Ramsey. She has issues with her ex. She starts out as a rookie hero and by the current issue, has gained plenty of experience, but is still new enough to be awed by Batman and Wonder Woman and thinks it's cool to be one of the costumed crimefighter gang. She's no stereotype. She says what she wants. She takes risks. She has her own code of ethics. She'll take a life if there's no other way to stop someone.

The book has one of the most eclectic supporting casts you'll find, all of whom are entertaining. There's Dylan Battles, the one-time criminal henchman of all trades who is now in the witness protection program and is Kate's go-to guy for all things tech. His relationship with Cameron Chase, an old friend of Kate's, is priceless, truly. Then there's Mark Shaw, who used to be a Manhunter. And then there's her law partner, Damon, who has a hot thing going with Todd "Obsidian" Rice. This is a diverse group of characters, with all treated with respect and dignity, except the villains, of course.

Just about anyone from the DCU can and does show up in this book, from members of the JLA to an OMAC to Director Bones. The villains range from the Shadow Thief to Copperhead to Cheshire. As first a federal prosecutor and now a defense attorney on the DEO's payroll, Kate had tried or defended some of the worst DC villains. You never know who might turn up. The book is firmly rooted in the DCU continuity, right up to Kate defending Wonder Woman in Max Lord's death. Even Kate's family history ties her tightly into the DCU.

The OYL jump worked nicely, too. The main changes being the ex is remarried with a baby on the way. But there was nothing too jarring. Just business and life as usual for Kate, which means plenty of action, thrills, and emotion in this tightly plotted book. Plus, the art's great and she has one of my favorite costumes.

Manhunter has been resurrected twice now after cancellation. Let's make it a real success this time. It's rare to get second chances in comics. Third chances are, or were, non-existent, til now. Let's show DC they were right to take the chance. Again.

Scripted by ShellyS at 9:28 PM

Email ThisBlogThis!Share to TwitterShare to FacebookShare to Pinterest
Categorized as: female characters, Manhunter