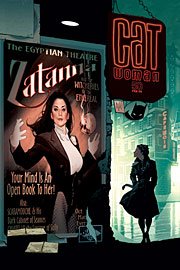 Catwoman 50
I've been awaiting this one with both nervousness and eagerness. Zatanna has come to tell Selina she isn't who she thinks she is. Given the revelations in Identity Crisis, this was a no-brainer, yet my brain refused to indulge in the obvious speculation. And of course, the obviousness won.

I've always liked Selina. Sure, she was a villain, but she never hurt anyone, was sexy and clever, and gave Batman a run for his money. On Earth 2, she reformed, married Bruce, and had a daughter, Helena Wayne who became the Huntress (and that's still my preferred version of Huntress, though I have warmed considerably to the current one). Selina was a complex character, but I didn't read her solo title til the reboot. She already had a comic when I was back to buying comics and I was going slow. A book devoted to someone who was a criminal didn't really appeal to me and I didn't really like what I saw when I flipped through the pages.

When they rebooted the book, giving Selina yet another costume and a nice, noir look with an emphasis on mystery, adventure, and firmly putting Selina on the side of right even if her methods and some of her motives made Batman seem a member of the establishment, well, I was willing to give it a try, because there are so few good, strong female characters with their own books.

I was rewarded with topnotch writing from Brubaker and luscious art from Cooke. I managed to deal with art changes because the writing was still topnotch and the art was okay, even if Slam started looking like Robert Mitchum. This past year, I started to worry that the book was losing its edge, that the tales were veering away from the book's stengths. And then we got this issue.

All so predictable and yet, so very well done. From the gorgeous cover to Selina's confusion on the last page (of very nice art) as she stares down at all the costumes she's worn laid out on her bed, this was a tight, emotional rollercoaster. I felt Selina's confusion and pain, her sense of violation at what had been done to her. And yet, I'm of a mixed mind as to the revelation, itself.

See, I wanted Selina to have decided that helping people was better than stealing from them, albeit that they were different people. I liked her being the protector of the East End. I liked the fact that she had a drive to do this. That she was single-minded in this pursuit and that she dared do what even Batman wouldn't. I liked that she'd come to this stage in her life, had reevaluated her needs and yes, her life, and had made some tough decisions. And now, thanks to one simple spell cast years ago, all that is gone.

A thought about Zatanna's role here is needed. This is a complex issue, too, one I don't know has been explored because I don't read all the DCU books involved in the Crisis storyline. I don't read the JLA books. I like that Zatanna's conscience has bothered her about the mind wipes. I like that she's trying to set things right. She's also been a favorite character of mine, but there's a double edged sword here. She and the JLA had no right to do what they did to the villains, no matter how well-intentioned they were, but now Zatanna is once again disrupting someone's life. Yes, as she tells Selina, Selina had the right to know. And yet, in doing so, she's once again affected someone else. She tells her, then throws her back to the wolves. She tells her because it's right that she does so, yet her motives aren't pure. Absolving herself, clearing her conscience, is also part of it. And that is a key factor in doing things to people without their consent; setting things right, or making the attempt, can be as disruptive. It isn't without consequences. I would so love to see an awareness of that from Zatanna.

The whole DCU upheaval Identity Crisis ushered in has real impact here, moreso than in many other books because this affected the very nature of the lead character, her motives and actions, and has put both in question. It has changed everything and yet, perhaps, nothing, in that this is a continuation of Selina's life as she deals with the toughest challenge she's had to face. Not the dastardly deeds of a parade of villains. Not attacks on her friends and family. Not brushes with death. This time, she has to sort out her true feelings and decide who and what she is and will be. In the hands of a skilled writer, that can produce the most compelling fiction of all.

I like Selina too much for her to revert to her criminal life, yet I don't think she can. Despite the memory wipe, she has years of experience as a "do-gooder." Those experiences remain and can't help but influence her. I can only hope Will Pfeifer, or whoever continues to write Catwoman, understands that and gives us a Selina who is better than ever, someone I will continue to want to read about. I'm going to bet that we've got a lot of interesting, exciting reading ahead of us.
Scripted by ShellyS at 11:44 AM

Email ThisBlogThis!Share to TwitterShare to FacebookShare to Pinterest
Categorized as: Catwoman, reviews