In Lieu of a Real Post, Roy Harper Redux 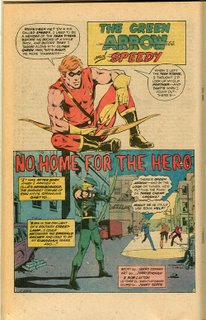 World's Finest 251 was one of the 80-page Dollar Books published by DC in the late-'70s, June/July 1978 to be exact. This issue featured stories about Wonder Woman, Black Canary, Creeper, and, as pictured, Green Arrow. One of the fun things about redoing my comic boxes is that it gives me an excuse to browse through my collection. I wish I could say the color in the book is as bright as I have it here, but I had to up the contrast as it's rather faded.

As I recall, this was the first time Roy and Ollie were together (or it might've come after the story when Roy was performing with his rock group and broke his leg, but as I didn't keep that one -- I actually didn't like that story and the book it was in -- I don't recall which came first) after Roy's drug addiction story in GL/GA and is a rather tense affair, showing Roy and Ollie unable to communicate (gee, there's a shocker). I liked it for the feeling of inevitability it conveyed, along with the underlying sadness that these two characters, after all the year of being "father" and "son," were so at odds.

It wasn't even that they disagreed or argued; they simply, as Roy says in the story, "We're still a good fighting team, Ollie... but I guess that's all we are, now. Too much bad water under the bridge... too many things we should have said, once, but didn't... Now it's just too late. You know?" Ollie's reponse of "Yeah, kid. I guess I've always known." Which just proves that Roy emulated Ollie too much and Ollie, for all his social awareness and self-righteous indignation over injustice, was still and remains a real ass sometimes when it comes to his personal life and the people who care about him. And it's that complexity of character, when it was and is done right, that made these two such favs of mine for so long, and is partly why I'm not enjoying the current run of GA OYL. Although Ollie turning the tables on Slade was pretty good.

I have it in what I call "The Roy Harper Collection." Mainly, I had a long box of Teen Titans, Titans, Outsiders, and any book that Roy guested in, including the Arsenal mini-series. And of course, this issue of World's Finest. I'm moving them into short boxes which will stack nicely in the corner of the den.

Meanwhile, I have read a bit of the new comics this week and last, and am really enjoying 52. I like how it's jumping around and playing out in real time, more or less, but as in real life, not much usually happens at once, so until I have more to comment on, a full review will have to wait. I love the art, though, and the crisp dialogue.