Lots of books, so let's get to the reviews, in no particular order.

Supergirl 9
Geez, but I can't make up my mind about this book. On the one hand, I had no clue what the OYL arc in Kandor was about (obviously, there's more than one gap in my DCU knowledge from my boycott years). On the other hand, I like how Kara is being portrayed as a powerful female with teenaged angst. She seems real. But she's also depicted showing way too much skin, which unfortunately or not, is also all too real, based on the teen girls I see on the subway and the streets of NYC every day. The book keeps me just interested enough to keep reading. But if Capt Boomerang doesn't shave off that goatee thingie and stop looking like Roy Harper, I'm gonna scream. Nice guest turn, there, though.

Hawkgirl 55
A real mind trip. Just wish something new was actually happening here. Pretty creepy, however. Another book I can't make my mind up about.

Flash 3
I really liked this issue. Some nice character bits and Griffin is just the kind of misguided wannabe hero who makes for interesting conflict, even if we've seen his kind before. Finally, I like Bart and his scenes with Val were nice. The art is really nice, too, with very expressive faces.

Blue Beetle 6
The art seemed less distinct and a bit messy this issue. Nice switcheroo with La Dama and things are starting to get very interesting re: the whole scarab thing, but really, did anyone not think the thing was extraterrestrial? Sheesh. ;)

Birds of Prey 97
Another ho-hum, typical issue, which for BoP means damned fine. Lori is a nice, complex character who is trying to find her own way and there was no easy solution and no real resolution here. Very nicely done. Nice art, too. And Zinda is quickly becoming one of my favs.

Wonder Woman 2
Finally. Nice issue. I loved the reference to I Ching. Not much of Donna this issue, but Diana was, well, wonderful. The Batman appearance in flashback was good, the art is nice, and it was nice seeing Cassie and Robin, especially showing Cassie's feelings of abandonment by Diana. I like the pacing as this story plays out. Now to not have to wait so long for chapter 3.

JSA Classified 16
This finished fairly strong for a cliched story, uh, old-fashioned type story that seemed rather padded. The female characters carried the day and I really am coming to like Vixen, a character I used to feel indifferent about. Which is good if she ends up sticking in Justice League.

Checkmate 5
I know lots of folks don't like the constant reminders of everyone's chess pieces, but I appreciate the reminders because, well, my memory is a sieve these days. I love the art, I like the characters, I'm intrigued by the complications the romance between Sasha and Mr. Terrific could lead to. I also like the political machinations and the backstabbing. This is a nice, gritty book.

52 16
Marvel Family. A wedding. Renee and Charlie. Do we need more? Renee and Charlie should get their own book, or maybe a miniseries based on their pairing here. And this installment had a lot of joy mixed with sadness and pain. Excellent chapter of this year-long saga. 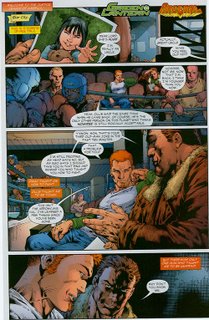 Justice League 1
Should I ever see Brad Meltzer in person, I'm gonna kiss him. He put Roy in the Justice League, let him come into his own, be treated as an equal by the older generation of heroes. Okay, so mostly right now that's Hal and Dinah who have always been on his side, but still.... I would've loved to see the scene where Clark, Bruce, and Diana voted on him or to see why they chose him over Ollie, but I'm very happy. Now to make sure he stays on the team, once Brad leaves the book. And I hope, with such a big group, that we'll get to see some of his personal life because unless he drops in to visit Ollie now and then, he has no other home. The Outsiders and the Titans before that gave him a lot of personal scenes. Also, I'd love to know what he's doing for money now and how he spent the previous year.

Pictured is my favorite page from the book. Hal telling Roy he taught him how to fight and Roy thinking that "Dinah taught me how to fight. Ollie taught me how to be tough. But there was only one man who taught me to be unafraid." I love this stuff and I love that Roy and Hal can still be close. Brad really gets these characters.

I love that we see Roy and Dinah here and have seen them together in GA's book. Now if only Gail Simone would have Roy guest star in BoP (unless Dinah's the one being dropped from there, and I sure hope not).

I've always liked this version of Red Tornado, so I'm enjoying the story, actually teared up at the end of this chapter, and loved the flashback with the old art. My memory tells me it really is from the old story of John Smith trying to assimilate with human society. And I've always enjoyed Ed Benes's art and I think he's at the top of his game here.

Email ThisBlogThis!Share to TwitterShare to FacebookShare to Pinterest
Categorized as: Justice League of America, reviews