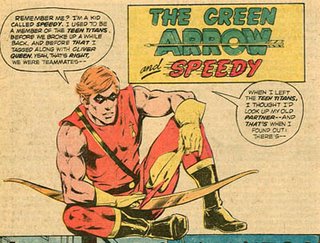 This is a shot I'd meant to post in the Roy Harper Galleries, but I think I forgot it. It's a nice, sad, bittersweet story about Roy and Ollie working together for the first time after Roy kicked his drug habit. And despite hopes they can be a team again, lack of communication and two stubborn personalities sabotage the reunion. Roy does appear to be more mature, older, wiser, and sounds it, too, but he's too much like Ollie, both men unable to put the hurts of the past aside. The story was a long time coming, as the drug storyline needed a followup and a lot sooner.

From Batman + Arsenal 1-shot. This was a really nice story. Roy was in over his head, but managed to do a good job, even if he did display his usual cockiness and screwed up a bit. And somehow, he didn't drive Batman to toss him out of the Batmobile, though I'm sure Bruce must've been tempted at least once. Nice art, too, even if Cheshire didn't look Asian. 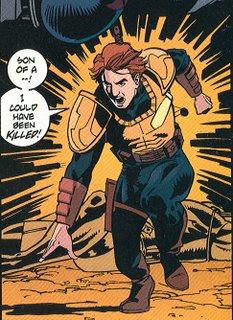 Roy's costume has those silly shoulder pad thingies, but the tights are nice and tight. I must admit when I got back to reading comics and found Roy dressed like this, I was shocked. Way too much armor. His costume in the Outsiders was much better, but I prefer the one from the mini-series and the last Titans series. Oh, and I liked his hair longer, too, but I've gotten used to the short cut.


This last one is from the Then & Now 4-parter in Teen Titans, issue 12, of uh, one of the later series. Sheesh, there were a bunch of them. The orignal Teen Titans guest starred and Roy gets a new costume, which he didn't have for very long, swapping it out for a similar one but less like Ollie's in the Arsenal mini-series. In this book, the coloring makes the costume look kinda dorky, though the tights are still nice and tight. Oh, right, they're supposed to be some sort of pants. Yeah, sure.