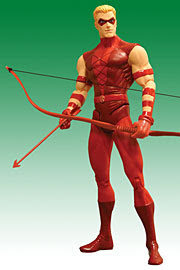 OMG, I can't wait for this to come out. Yes, DC Direct heard my pleas and is doing JLA figures and Roy's due to be released on August 1, 2007! Can anyone imagine a more handsome action figure? He'll go great with the Donna Troy figure(s) I'm planning to get in May.

He's wearing the Red Arrow costume, tho. I wanted him as Arsenal. I'm not sure what's going on. I don't like him being a mirror of Ollie, but I can live with it. I just hope he makes up his mind for once as to who/what he wants to be now that's he's grown up.

The Vixen figure will give the Power Girl figure a run for her money.

I guess some comics were announced, too. heh I think it says a lot about me these days when I check the DC Direct solicits before I check the comics solicits.

Scripted by ShellyS at 7:52 PM