Where are the Panties? 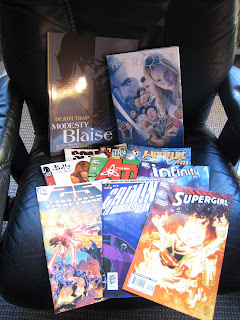 Quite the haul today, thanks to the latest Modesty Blaise collection and the Heroes hardcover I've been eagerly lusting after and finally own. However, while there was much to enjoy in today's batch of regular comics (and reviews will appear soonish), including the latest Criminal which ends the second arc, there was uh, well, see for yourself. 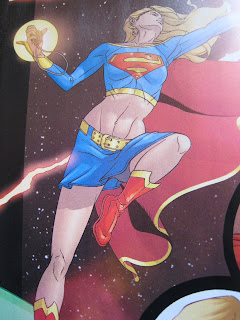 Now, I basically liked the art on Supergirl this time. The skirt on her costume didn't look like a long belt. But, but, but... well, look at her. This was just one of several shots of her about to lift off, one leg raised, revealing... well, no sign of panties, that's for sure. And it is still a bit low at the top, barely staying on her hips.

I don't have a problem with sexy art. I like Ed Benes' work, after all. I do have problems when teen characters are sexed or tarted up and I do have a problem with anatomically incorrect characters, but sometimes, well, there really is no excuse, especially when the art is otherwise fine, to peek under the skirt of a teen girl who has been established to be under the age of consent. And while nothing anatomical was on display, other than upper thigh, more or less, there was certainly enough shown to indicate no underwear. So, either drape the skirt better or show panties. Neither can be all that difficult to draw.

I might have considered that the skirt was just long enough to make it unclear, in that the panties were a bit higher than shown, except for the way Kara's leg is curving and for the number of such shots designed to reveal what's under her skirt.

I'll get to the content later, because, really, I need to time to decide if it was me or the story, but it made no sense, even for an opening chapter.

Scripted by ShellyS at 3:44 PM