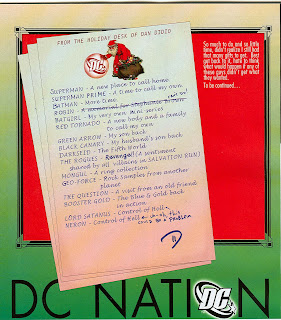 A few items on this latest DC Nation to grace the last page of this week's comics are of some interest.

For Robin: A memorial for Stephanie Brown can't be done. Why? Because she won't be needing one soon? She should have gotten the memorial. Then, if/when she returns from the dead, Bats can take it down.

For Green Arrow and Black Canary: Getting Connor back. Not crossed out as impossible. Hmmmm.... He was shot. Doesn't mean he's dead.

Booster Gold: The Blue & Gold back in action. Hmmmmm.... Maybe we Blue Beetle/Ted Kord fans will have something to celebrate, but I don't want to lose Jaime Reyes as Blue Beetle, either. Well, we've got 2 GAs, a handful of GLs, and 2 Wildcats. Multiple characters with the same codename can work.

Yup, things look interesting for the DCU in 2008. If only I could say the same about Justice League of America 16 (and future issues?). Reviews tomorrow night.

Email ThisBlogThis!Share to TwitterShare to FacebookShare to Pinterest
Categorized as: DCU, news