The Perks of My Job

First, it looks like I'll be going to the NY Comicon on the Friday, for the preview for profressionals, including librarians. For free. My library system sent out an email about it, which my bosses and I assumed meant we could go. So I registered. Yeeha! 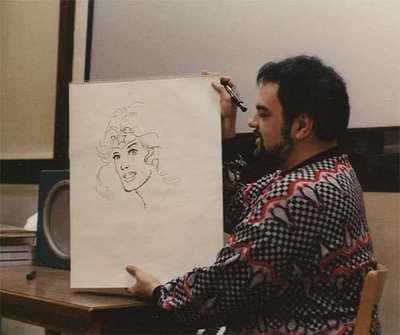 Second, I offer this photo. Back in the '80s, when I was YA librarian, I discovered the Teen Titans APA (I was a Waitlister, meaning I got the mailings if I paid postage and could contribute, but I wasn't officially a member as membership was limited to 40 or so, so I was waiting for an opening), thanks to a then-friend I knew from fan fiction (for TV shows). She was also a member of the APA and a Wingnut and one of the real life folks who got drawn into the Donna Troy/Terry Long wedding issue as guests (she was the plump blonde, one of the women ogling Dick Grayson's butt, as I recall, if you have the issue).

She was visiting me from FL and she knew George Perez, who at the time, was living a few subway stops away from me. So she called him and got us invited over for a few hours one afternoon. While there, I got him to agree to do a library program for teens. He ended up doing two for me, for teens looking to break into the comic book industry. We had a great turnout, which was to be expected, both times, and he was as nice as could be. This photo is from the first of the two programs.

Email ThisBlogThis!Share to TwitterShare to FacebookShare to Pinterest
Categorized as: artists, George Perez