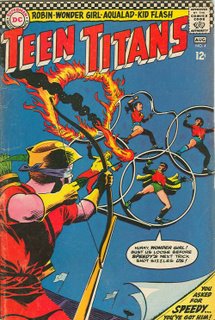 Outsiders 34
Yeah, I know. This isn't a picture of the cover. But I'd rather post the cover for Teen Titans 4, than the one for Outsiders 34. By the time this issue of TT came out, in 1966, I was already a big Speedy fan. He wasn't my favorite, yet, but he was well on the way to getting there. In 1966, my favorite comic book characters were Supergirl, Robin, Lois Lane, and Element Lad of the Legion of Super-Heroes. Roy's appearance in TT was a big deal, as you can see by the promo in the bottom right corner. Except for the drug addiction story in Green Lantern/Green Arrow, that was probably the last time anyone made a big deal about Roy appearing in any book, and that includes the mini-series devoted to him. And with its Olympics theme, TT 4 seems rather appropriate now, with the Winter Games just concluded.

Now, onto Outsiders 34. I've gotten used to Judd's habit of starting a story with the guest characters, the people who provide the impetus for the story, but I don't expect to get halfway through the story before I see the main characters, even if one of them appears early on under cover. It's not bad storytelling, but it's not what I read this book for. I read this book for the Outsiders.

Which brings me to the current team. I expected to find changes. I was looking forward to having all the gaps from the year in between gradually filled in. What I was not expecting, not after seeing the final panel in the last book showing Roy moving through the many versions of himself, was that he wouldn't be in the book. Nor was there a hint he would be later on. Sure, there are supposedly others and maybe Roy is one of them. Or maybe he'll show up in another book. Or maybe he's no longer a player or maybe he's dead. He's the reason I've been reading this book. I grew fond of Grace and Anissa and I've loved Dick forever, but they're not enough to keep me reading. I like Katana and Metamorpho, and they're not enough, either. And I preferred the fascinating Shift to Rex.

And while the addition of Capt. Boomerang is intriguing, his looking like Roy with his hair growing in is confusing and annoying.

It's too soon to comment on the story. I'll need to read the whole arc before I can pass judgment on it. The art was very nice and I like Anissa's hair. But without Roy, I can find no reason to keep reading this book. So, I'll finish out the story, and if there's still no Roy here, that will probably be it for me and the Outsiders.

Scripted by ShellyS at 9:19 PM