First, a few reviews. I had a lot of comics waiting for me today.

JSA: Classified 13
I'm glad this story is over. It was okay, nothing great. Art was average. Nice touch with connecting in Checkmate.

Birds of Prey 95
Nice to have Dinah back with the Birds at the end. Much as I was enjoying this arc, I didn't want her gone from the Birds too long. Nice twist at the end (predictable, but nice) with Shiva and Dinah both taking young girls under their wings, each with the one meant for the other. Sin with Dinah made me miss Lian Harper, tho. I loved Zinda in this, too. She's just plain fun.

52 Week Seven
I've always been a sucker for soap-opera style writing, with stories playing out slowly and this real time book has me hooked. Booster is such an ass and Ralph lighting into him with the press as witnesses was great. And it was nice to see Ralph on the aggressive. It shows he's getting his life together. The scene with Montoya and Kate Kane was nicely tense, too. However, if Montoya suffered a fractured elbow, as she narrates on Day 2, then why does the cast end just below her elbow and lets her bend her arm (without pain)?

~~~o0o~~~
I must admit I'm getting more and more confused re: OYL and Infinite Crisis. I'd been thinking the ending of the pre-OYL titles led into the Crisis, then I thought they came after the Crisis, which would explain how Ollie was near death in the last GA issue pre-OYL but fine in Crisis. Am I missing anything? 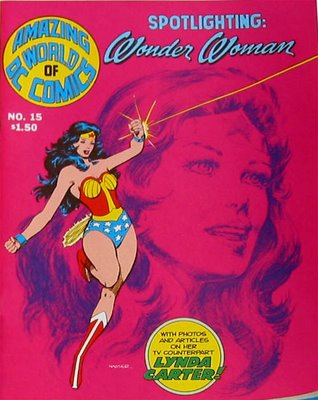 Meanwhile, I've been cleaning out stuff and have put some comics-related stuff on eBay. So far, I have a bunch of Amazing World of DC Comics listed and will be putting up some Cartoonist Profiles from the '80s I think they are, and a few Legion Outposts from the '70s. In case anyone's interested. Seeing the cover of this AWODCC, I'm reminded of how much I loved Mike Nasser's art. He did an especially nice Wonder Woman. My eBay name is shellys555. I have a few comics still up, too.

Scripted by ShellyS at 7:56 PM

Email ThisBlogThis!Share to TwitterShare to FacebookShare to Pinterest
Categorized as: reviews