Meanwhile, I loved today's "For Better or For Worse," not just for the joke, which is pretty funny, but for the way it echoed something from my own life.

Here's a panel that shows Elly and John in costume, he as a hula dancer and she as a guy with bad fashion sense. 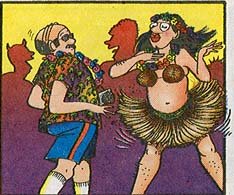 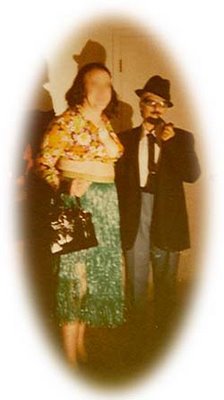 Not only did my parents once attend a costume party in reverse sex, but my father was dressed as a hula dancer. No coconuts, though. We got him fake boobs, which tied with string around his back, and we got him into an old shirt of my mothers that uh, barely covered the titties. We (me, my sister, and our mother) thought he looked quite fetching, especially with the wig and fake grass skirt. One of my mother's handbags completes the ensemble.

Mom was dressed as a man, in one of my father's old suits, plus bald wig and mustache. Except for the hat and clothes, I think she looked remarkably like Elly.

I've smudged his features which are a bit too clear, but my mother's face was disguised enough for me to put online without smudging her features. The party was either for Halloween or New Year's Eve, as they and their friends had more costumed New Year's Eve parties than for Halloween. The picture was taken in the early-'70s.

Scripted by ShellyS at 1:15 PM

Email ThisBlogThis!Share to TwitterShare to FacebookShare to Pinterest
Categorized as: costumes, halloween, links