The Week in Comics

Blue Beetle 8
This continues to be loads of fun with nice, suitable art and quirky characters. I appreciated the quick overview of Blue Beetles past. Things are moving along, the mystery of the scarab is deepening, and the dialogue sizzles. I really like the panel breakdowns, too. And I like that Blue Beetle looks to have a nice, complex backstory, well beyond boy finds scarab, scarab attaches itself to his back. I like that there promises to be much more to it.

Outsiders 42
More mad scientists. Nice enough art. I can appreciate Katana's reason for changing her costume, but it's not very attractive and why the hell did they cut her hair?! From the head up, she looks like a boy. And if there was any real reason to devote 4 full pages in the beginning to actor boy and his agent, I musta missed it. Judd is big on starting with guest characters, filling in background upfront, but this was a bit much.

Nightwing 126
The mystery deepens, but the story was almost irrelevant, or at least, took a backseat to the return of Alfred in Dick's life and the nice way Marv wove in Dick's circus background. Very nice. It's also very nice to see a Nightwing who is capable and competent and sexy looking again.

52 26
Halfway done. Mostly Black Marvel time, and a nice Charlie and Renee scene on Day 1. The Hawkman origin backup was nicely done, concise, not confusing, and beautifully illustrated. No big reveals in this one, but things are moving along. 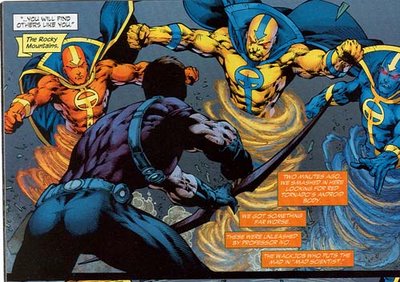 Justice League of America 3
A pleasant surprise when this turned up in my pull slot at Forbidden Planet today. It would've been worth getting just for the above panel, but there was a story, too, and other characters and... It's nice seeing Hal, Dinah, and Roy working together. Two old friends who don't have a ruined romantic relationship (that was Dinah and Ollie) and the teen who's now a grown man they both care about enjoying light banter in battle does it for me every time. The cover with all the Tornados is awesome and the interior art is as wonderful as the first two issues. I love the page with Hawkgirl swooping down to help Black Lightning. There's a particularly large butt shot of Dinah and her lovely tush, but I'll leave that for others to post if they so choose. It looks like we'll soon have the whole gang together and I'm looking forward to solving the mystery of Red Tornado. The graphic clue of the returning "old threat" at the end (see, no spoiler) promises an entertaining issue 4.