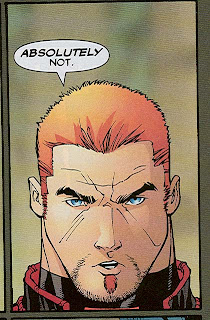 This is the reason I don't like the art currently on The Outsiders. I'm not liking the book all that much, but that's a different matter. It's not that the art by well, 2 people who alternated pages and since they don't actually number pages anymore in comics it seems, and I'm too lazy to count, I won't name the humans responsible. Which might be just as well.

There wasn't much of a problem in OYL with Capt. Boomerang, Jr on the team, given that Roy was now off it. So, there wasn't much if any likelihood of confusing the two characters. Which wasn't the case in the first OYL issue for me, since I didn't know Roy was really off the team til I read it.

For the record, that's Roy "Arsenal" Harper to the left. In the pic below, we see Capt. Boomerang, Jr. from the same issue. The hair style is different and Roy's got different face hair on his chin, but they both do have chin hair and both are redheads. And since the artists seem to utlize limited facial expressions, and use a fairly minimal/cartoonish style (this isn't ultra realism, folks), the two characters do look alike, especially at first glance, not counting the costume Roy's wearing and Boomer's prison orange and that weird collar thing. 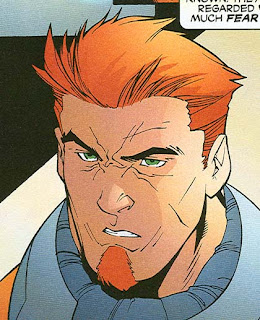 The story hasn't been all that bad, though we didn't get any more in this issue re: what leads Roy to quit (or be tossed off) the team, which is why I'm still reading the book. The storyline with Anissa's father, Jefferson "Black Lightning" Pierce going to prison for murder is actually interesting as it fills in a gap in continuity for the missing year. Mostly, though, the issue is devoted to Grace and Anissa's then-budding relationship. I imagine Roy would be interested to know Grace "has sex with men" and "relationships with women." Then again, when it came to Grace, Roy was interested in sex, not a relationship, either.

And yes, here I am talking about characters humans created and other humans have chronicled over many years. It's the fan person in me. The fangirl who wrote fanfic for her favorite tv shows as well as a few pieces about Roy Harper for the Titans APA. It is the ultimate compliment, I think, to a writer to take their creations as real on some level. Roy's been "real" to me since the mid-'60s when I developed a crush on him. As impossible as it sounds to have a crush on a two-dimensional creation, it happens all the time. So I find it a bit disturbing to see another character with a face so similar to his. And I like Boomer. I just wish he was drawn as a character in his own right and not a pale imitation of Roy.