Yeah, this ish deserves a whole post to itself, thanks to extreme Roy goodness. First off, JLA 7 seemed a bit disjointed toward the end. Brad Meltzer explains why on his MySpace. Of course, the pages aren't numbered these days, so I had to guess at which were out of order and to be honest, I checked this a few ways and it still reads oddly. Ah well. No matter. There was much goodness in this ish to make up for it. Let's begin, shall we?

Two covers. At one time, I might've gotten both, but I settled for the right half, though Roy was showcased on the left, because I preferred the cover with Diana front and center, not Superman. At times like this, I wish they'd done a wraparound cover, but the foldout group shot inside made up for that.

Art-wise, there was a lot to like, especially the inclusion of shots of the older versions of the League. And while Benes overdraws muscles and boobs and butts and shows a lot of flesh, he sure can draw the details. The tears welling in Dinah's eyes when she sees Roy in his new costume was perfect. When they fall, that's ordinary. Most artists do that well. But the moisture in her eyes was special. There's a lot of emotion in this panel. There was a lot of emotion in most of the panels. Ed Benes isn't my favorite artist, but I do like his work.

I also liked how repeated panels emphasize things: the use of Roy shooting up in both Roy and Ollie's reminiscing, the repeated with some variation panels of Roy and Kendra discussing his costume. And Roy's expression when he's invited to join the JLA showed his confusion, eagerness, hope, disappointment when he thinks it's a joke, elation when it's not. He really needs to work on that self-confidence problem. He might not be the first Teen Titan to graduate to the JLA -- that was Wally -- but he's in and Nightwing is still with the Outsiders, so that says something. Brad's feelings for Roy and the rest of the Arrow family is clear in this issue as Roy's joining the League gets the most panels, especially when you include Hal and Ollie talking about it.

The switch to the Red Arrow costume and name made sense and it continues Roy's maturation, that he can now assume that identity without fear he's undeserving or that he's in Ollie's shadow. He truly is his own man now. I'll even forgive the absence of his Navajo tattoo from his upper arm. I'll just figure it's hidden by the armband. Yeah, I know. It's something artists probably hate drawing every freaking panel the guy's in, but Grace's tattoos in The Outsiders are always remembered. 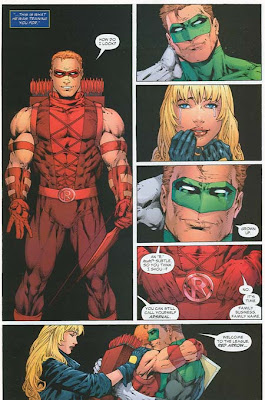 I loved this. I loved the hug, the caring that comes through here, that they are all a family of sorts. Much as I loved Dinah in Birds of Prey, except for one story involving Cheshire where Dinah and Cheshire go at it and Roy and Lian are mentioned, this part of Dinah's life was not seen there. When she brought Sin home with her, there was nothing about Sin being introduced to the other people in Dinah's life. Then here, we have that part of Dinah's life, but hardly a hint of the other. It's almost like Dinah is two characters. Which made me really appreciate the last BoP where Dinah's joining the JLA after quitting the Birds is referenced. Continuity is a good thing, people.

That said, Roy was a bit forgetful, or should I say, Brad was, when Roy's thinking about the past and how Dinah saved his life back when he was at his "lowest point." Because he lumps Hal in with Ollie as throwing him out, when it was Hal who was troubled by Roy's defense of addicts and why they do junk and Hal who goes looking for him. It was Hal who brought him to Dinah and then went off to find Ollie. So Hal didn't deserve that slam.

Also, was Roy changing in front of Dinah? Did she at least avert her eyes? Maybe it was just the shirt he needed to change. At any rate, this issue is gonna be a hot topic among the fan fic contingent who adore all things Titans then and now.

The new HQ is pretty snazzy (though for all the history about the location, the JSA is still around and they're as historic as you can get), and the storyline involving GeoForce is intriguing. But it's the characterization that made this issue special, because, let's face it, there really wasn't a story, just the hints of things to come to keep the story of the group coming together from being too passive. I know many people were peeved with how Brad started this book, bringing the gang together and then forming the team, misleading everyone it seems, including me, by having the big 3 voting among themselves on the membership and making it look like the group was already decided. In contrast, JSA started with the group forming and thrown into action. Still, I'm glad each book had a different approach.

I hope, for the characters who don't have their own books, their personal lives won't be forgotten. At least, in the Outsiders, I could count on seeing Lian every now and then. And I'd like to know more about Mari. The scene with her being asked by the little girl for her autograph was wonderful. But as long as we're treated to scenes like the one with Hal and Ollie, I'll be happy. Oddly enough, while Roy wasn't there, it was about him as much as it was about Ollie. 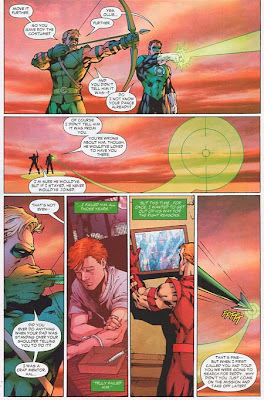 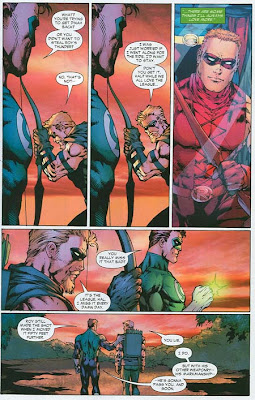 "Don't you get it, Hal? While we all love the League, there are some things I'll always love more."
-- Green Arrow/Oliver Queen

Scripted by ShellyS at 4:52 PM