Continuing a look at the short, sweet life of Lian Harper. Not that Lian's life was perfect. From the start, she was used as a by her mother against her father. And in the next appearance I read, she was kidnapped as part of a plot to control Cheshire. 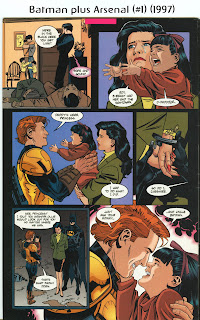 The team-up of Batman and Arsenal in the Batman plus Arsenal (1997) one-shot was wonderfully played and with Batman (and Dick)'s help, Lian is rescued, Cheshire is captured, and "Uncle Batman" becomes an important part of Lian's life. The art was especially nice, even if there's no hint of Asian features in Cheshire, or Lian.

From here on, it was hard for me to choose comics to scan, or even pages/panels. I've tried to show an array of art styles, while keeping the total number of images presented in this two-part essay to ten.

The Arsenal 4-part mini-series (1998) is a classic. Rick Mays has a cartoonish style that worked nicely for Roy and Lian, and Dinah who appeared in key scenes. 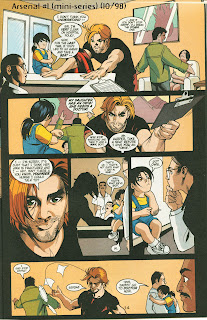 There are so many wonderful scenes in these 4 issues, but this nicely showed how seriously Roy took his role as father. He's taken Lian to the hospital after she's fallen on her arm after crawling out of her playpen. Which makes her a bit younger than her previous appearances. No matter. Her age seemed to fluctuate from story to story and sometimes, panel to panel. Drawing children seems to be a problem for many artists. Some draw them too young, some get the proportions wrong, and some just draw them as short adults. But there were enough who got Lian just right. 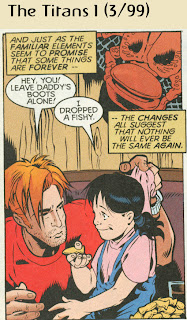 Lian got to join Roy and his fellow former Teen Titans for lunch in Titans 1 (1999). She was cute as could be without being annoying. I loved when she called Aqualad "Gill-head," something she no doubt picked up from Roy. 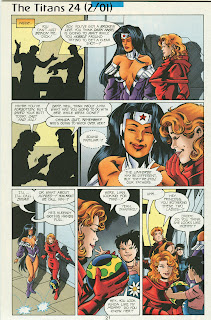 This panel from Titans 24 (2001) is part of a alternate time/reality mashup that brought a grown Lian Harper into our reality where she and our version of her younger self meet. We'll never see our Lian grow up to be this beautiful young woman.

In the years since her birth, Lian was kidnapped a few times and had to cope with injuries to her father, the worst of which had him shot 5 times. She had to cope with having a mother in prison for blowing up a country, among other crimes. Through it all, she remained a sweet little girl who made Roy proud to be her father. He learned as much from her as she learned from him. She made him a better man.

Roy will have to cope with losing her and we might be treated to an excellent story, but however this turns out for Roy, wherever he ends up, Lian will still be gone and the unique view she brought to the DCU will also be gone. I can't imagine the PTB can come up with a plausible way to bring her back someday. Even if they would try, which I doubt. People who can kill off a child for no reason other than shock and effect, when other plot devices would have worked as well without being so cruel. J.T. Krul will have his work cut out for him, to make me not hate what happens with Roy.

I'll end with this lovely page from Justice League of America. Roy is introducing Lian to Hawkgirl, before things soured between him and Kendra. 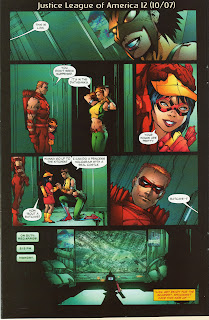 Lian Harper. She'll be missed.
Scripted by ShellyS at 9:53 PM