Here's a post I never wanted to write, and it got long enough that I'm splitting it into two posts. Mainly, I present a photo essay on Lian, who in her brief life lit up the DCU. She will be missed.

I thought I'd start with her first appearances (the ones I have/know of, at any rate). Note her red hair, no doubt colored as such to make it clear that Roy was the father. 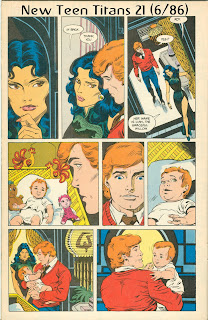 Cheshire dropped the bombshell about Lian in New Teen Titans 21 (1986). Roy had romanced Cheshire when he was a government agent and had no clue he'd fathered a child with her. At the end of the story, he goes to see Cheshire so he can meet his daughter. After a moment's hesitation, Cheshire relents, and Roy's life as a father begins.

A year later, Roy tricked Dick Grayson into helping him get to Lian, wanting to see her for her birthday. The story took place in Action Comics Weekly. In issue 618 (1988), in the concluding chapter, Dick brings Lian to see Roy in the hospital where Roy is recovering from a dose of Cheshire's poison. 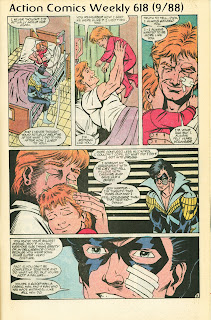 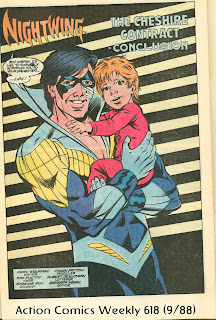 Dick was a true friend in this, forgiving Roy for his deception and helping him get Lian. At the end of the story, Cheshire has been arrested, and Roy is going to try for custody of Lian. 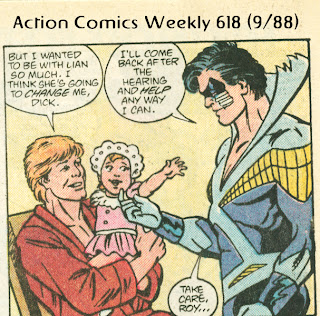 We'll forgive the silly, girlish bonnet; Roy was new at this and he probably figured a little girl should wear something cutesy and girlie. Or maybe one of the nurses picked it up for him. No matter. Lian was in jeans before long.

This is an important panel in Roy's development. He says he believes Lian is going to change him, and he was right. She made him a better person, a responsible person. He sure took his role of father seriously, more than Ollie did when Roy showed up or when he found out about Connor all those years ago. 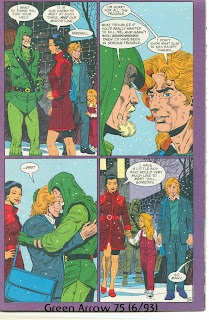 The next appearance of Lian that I know of was in Green Arrow 75 (1993). I had stopped reading Green Arrow around issue 45, tired of waiting for the creative team to even acknowledge that Roy existed in Ollie's life. A few things are worth noting. Lian's hair is still red (the scan's a bit off) and Lian demonstrates a never seen again power of changing her height from panel to panel. She's barely at Roy's waist in the first panel above, but in the last panel, she comes to Roy's mid-chest. Holy growth spurts, uh, Batman.

And Batman played a role in the next story I saw that featured Lian, which I'll show in part 2.
Scripted by ShellyS at 9:10 PM