I got to the Javits Center a bit late in the afternoon, and with the con ending at 5 pm, there wasn't much time to do a lot. I spent most of the time on line for Amanda Conner, again, this time to get a sketch as I'd brought an actual, small sketchbook with me this time. While I was waiting, Jimmy Palmiotti showed up at his table next to Amanda's and I asked him for an autograph after gushing in proper fangirl style over how I'm a big fan, which I am. And he did a drawing, too. After I got Amanda's sketch, of Catwoman, because I didn't want what most everyone else seemed to ask for (Supergirl or Power Girl), I stopped by at Jamal Igle's table to say goodbye and ask for his autograph (I'd gotten one a con or two ago, but had neglected to ask this time) and he graciously did a quickie drawing for me, too. And he called me by name without prompting, which is super cool. I don't expect him to remember that by next year, but he recalls my face, that would be great.

I forgot to mention yesterday that Amanda said she couldn't keep up with a monthly book and that's why she's off Power Girl. She'd love to do a graphic novel or mini-series with PG. Hopefully, DC will give her something along those lines soon.

Here are pics of the sketches. I don't need to identify them by artist, do I? Hint: They're in the order discussed above. ;) 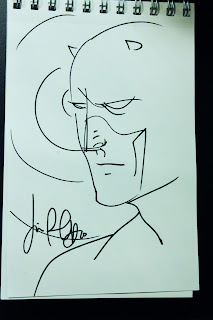 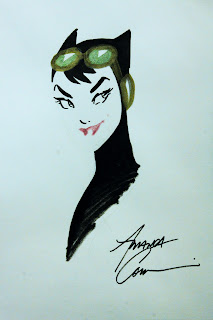 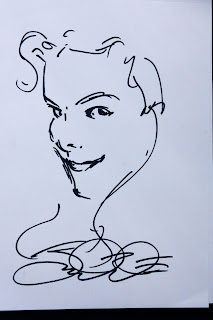 Then I met up with a couple of friends and took some more pics of costumes, and then came home. Next year's con can't come soon enough! :)
Scripted by ShellyS at 11:19 PM