Here's the second Roy "Arsenal" Harper photo gallery, as promised. This is one of my favorite looks for Roy. As I recall, this was after he got badly bruised and got his leg broken in battle with Deathstroke. His hair is longish but not too long. No visible stubble, which I also like, but a nice shot showing off his muscles and that fine physique. There's no doubt that he's a strong guy, judging from this pic. It's from the last version of Titans, number 31.

This next shot is Roy pre-bullet wound scars. I haven't decided yet if I should scan some of those. And I was upset when Roy cut his hair right after this phone call for the crewcut look he had in Outsiders, but it really grew on me. And this is such a hunky shot that I won't bitch about his Navaho tattoo that went AWOL from his upper arm. From The Teen Titans/Outsiders Secret Files 2003. 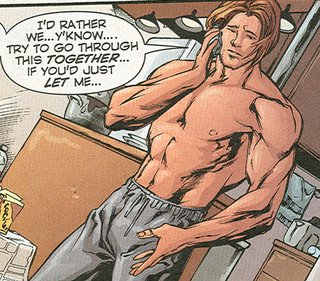 Roy and Donna. They really do make a cute couple. Same as I think Dick belongs with Babs (Nightwing and Oracle for those who don't know), I think Roy and Donna will always love each other on some level and belong together. I just don't know if they could ever live together. Could Roy be faithful? Or is he prone to Ollie Queen's roving eye and other roving parts?

Anyway, here's Roy and Donna K I S S I N G from The Return of Donna Troy part 4. 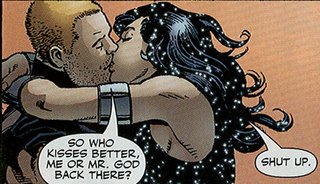