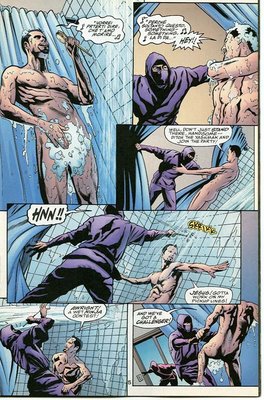 Outrageous post title? Perhaps. But Codename: Knockout was a pretty outrageous and wildly entertaining comic that died too soon, as in just halfway through the story writer Robert Rodi was trying to tell. He won my undying respect for posting the synopses for the remaining issues on the DC message board (I'm pretty sure that's where it was) after the book was cancelled.

The entire book is pretty much cheesecake, so I didn't bother scanning any pages with Angela (whose breast were bared more than once) or any of the other scantily clad or unclad females, but I couldn't resist this page featuring her young sidekick, the very gay Go-Go Fiasco.

I loved this book. It was one of the first I had to pull out to read on the subway ride home on Wednesdays after work. I remember laughing out loud (yes, I LoLed!) and old folks would stare or glare at me when they saw the suggestive covers of the books.

This was a farce, a satire, a comedy, a tragedy all rolled into one. It played with stereotypes and was fair in dishing out art like the above; okay, maybe showing a bit more female flesh than male. But it was fun. And it was well written. And I still miss it.

Email ThisBlogThis!Share to TwitterShare to FacebookShare to Pinterest
Categorized as: beefcake, codename: knockout