I was sad to read of Jeffrey Catherine Jones' death. I believe the first time I encountered her work was in the National Lampoon and on a couple of comic book covers. I know the non-powered Diana Prince era is not the favorite of most Wonder Woman fans, but I really loved the book back then because I loved the stories. Lots of intrigue and spy/suspense type stories, which I love and some fantasy in the form of guest appearances by  Fritz Leiber's Fafhrd and the Grey Mouser. And while the interior art was fairly average, there were some sweet covers. Two of them were by Jeff Jones, done in very different styles; one painting-like and the other very comic bookish. Never mind the bondage aspect. I have no trouble with heroes in peril if posed realistically, male or female, and I don't think anyone ever drew the female form as beautifully as Jeffrey Catherine Jones did. We've lost a great artist. And if you've never seen these covers, here they are. 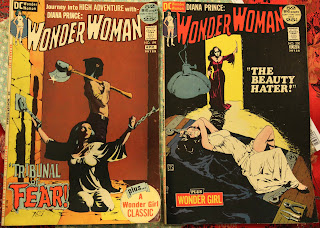 Scripted by ShellyS at 8:59 PM